Sedan is a small agricultural community located in the northeast corner of Gallatin County, Montana. Sedan is at the north end of Bridger Canyon, northeast of Bozeman.

Approximately 70 year round residents currently live in the Sedan area.

This post would not be possible without Linda M. Zupan, who captured the history of the area for others to enjoy. This article borrows heavily from her efforts, with the goal of preserving this information in the event her website goes away.

Her original postings can be viewed at A History of Sedan, Montana.

Note: At the time of this post, the images at Linda’s article are unfortunately no longer working, and her website has not been updated since 2008.

In earlier times Sedan was predominately a dairy community with its own Cheese Factory, post office, and store.

As one former teacher and resident, Eva Lachenmaier noted, “Many large milking barns could be seen around the community.” Sedan was never really a town, but there were many farmers and ranchers who had 160 acres each. 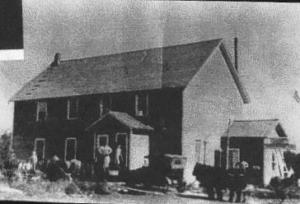 The Sedan Cheese Factory was also known as Shields Valley Cheese. The Cheese Factory was a two-story structure built by the community and the Yeoman Lodge in 1914. The upper floor, which was used for the Lodge and “community affairs” had a stairway on the east side with an entry for protection. An addition on the north side enclosed the boiler which heated the vats of milk. The whey vat on the west was sunken into the ground. A drive went clear around the building back to the main road and there were two vehicle bridges and one board walking bridge.

People who brought milk to the Cheese Factory often had pigs at home and were said to have unloaded their milk at the platform. When the milk cans were empty, they would fill them with whey to take home to feed their pigs. This was noted to be a “Pretty nice arrangement.”

Hellesmark of Farmers Creamery in Livingston was the last owner of the Cheese Factory. He contracted with Yellowstone Park to provide milk in the summer and bought the Cheese Factory where there would be a place for the milk in the winter. Hellesmark used the building in the winters from 1935 – 1941 at which time it was known as Shields Valley Cheese.

In 1958 The Cheese Factory building was sold and torn down. Only the cement floor is visible to identify where it was once located.

The Sedan Church still stands today and can be viewed from Montana Highway 86.The church cornerstone says it was laid May 9, 1898. According to “Tracks Volume I” Mark Cowan dug up a Bible in the 1960s which was buried in the foundation of the church. The Bible is on display in a tin box in a Livingston museum.

“A Mr. Clark donated the land and the community people built it for all, as there was no denomination,” as written in Sedan Community Country Cookbook (1989).

Looking at the building now you would not guess this was once a church as there is not a steeple or bell tower.

The Sedan Cemetery is about an acre in size and was apparently started when Josie Woosley’s “Grandpa” Samuel Maddox died in 1915 as his was the first name noted in Josie’s Bible (noted below) listing those buried in the Sedan Cemetery. (Tracks Vol I).

In (Tracks Vol. I) C.J. Landis notes numerous gray headstones stand today, bleached by weather and time. Inscriptions are almost invisible; headstones are falling over or broken. The lot is surrounded by barbed wire held together by wooden poles and metal posts. Rings of rock are lying on the ground.